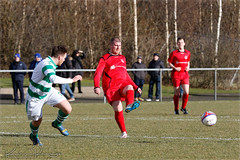 A tough game was expected but to be honest is was Rovers defence who were the creators of their own downfall today.

The match kicked of with Rovers on the front foot with several forays on the St Anthonys goal.

Ian Watt pulling of an excellent save from the St Anthony keeper following a shot from the edge of the box.

A further couple of speculative shots from captain Weir trouble the St Anthonys keeper but nothing came of them.

On the 13th minute a St Anthonys cross from the right could only be parried by Liam Grant in goal the ball then finding Henderson unmarked who easily headed home into the unmarked net for the opener.

The Rovers should have learned from their defensive frailties and tightened up at the back but 2 minutes later they found themselves 2 down.. 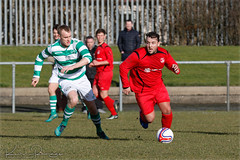 Even at 2 down the Rovers continued to press well without putting the st ants goal under any real pressure.

With 10 minutes remaining in the 1st half the Rovers defence allowed a free shot for Henderson from the edge of the box which again found the back of the net to but them 3 behind.

The second half continues pretty much like the first with good pressing from the rovers without creating any real good chances. 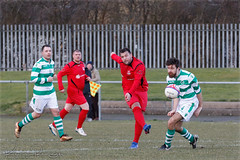 Carluke had a good shout in second half for a penalty as Watt had his legs taken from him in the St Anthonys box but the referee waved away any claim, perhaps the only person thought it wasn’t a penalty.

The game continued pretty evenly for the remainder of the half with saves being made from both sides keepers.

With the final whistle coming the Rovers management could see that although the team played well enough going forward there was some work to be done on tightening up the defence.

Next week sees the Rovers at home to Johnstone Burgh.