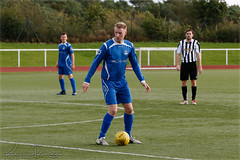 It was a disappointing day all round for everyone connected with the Rovers, a poor performance on the pitch culminating in the Management team choosing to leave the club immediately after the game.

On the pitch it all started well with the visitor being reduced to 10 men in only the 2nd minute of the match.

The Royal Albert goalkeeper charging out of his box and fouling the Rovers striker, the referee deeming it a red card offence.

Carluke huffed and puffed for a period and could not take advantage of the additional man and rarely tested the Royal Albert outfield player who had replaced the red carded keeper.

James Martin came close after he cut in from the left and sent a shot goalward but it was easily dealt with. 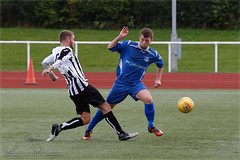 The Rovers should have taken the lead when a penalty was awarded and Haley stepped up against the Albert stand in keeper, however, a poorly taken spot kick was easily saved by the keeper.

Gary Gow then came close as he lobbed the keeper but the shot fell just over the bar.

It was the 31st minute before the deadlock was broken when Gow struck an unstoppable shot into the top left of the net leaving the Albert keeper stranded.

The Rovers should have pushed on in the second half and made the extra man pay but it was Royal Albert who were putting the Rovers defence under pressure.

62 minutes in seen Royal Albert awarded a penalty, the initial strike well saved by Hallford but 2 Albert players were quick to follow up and score an equaliser while the bemused Rovers defenders looked on. 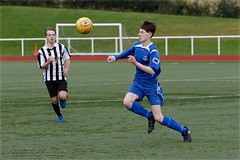 Rovers were given a lifeline not long after as another Royal Albert player seen red and it was now the Rovers 11 against the Royal Albert 9.

Although Rovers pushed forward looking for the winner it was still a pretty even game, a great save by Hallford yet again kept the scoreline level.

Royal Albert have to be credited for the way they defended with 9 men and kept the Rovers at bay.

Unfortunately the poor result went on to cost the Rovers their management team and Colin, Spike & Craig chose to leave the club.