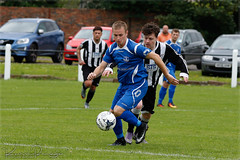 Carluke suffered another defeat in this pre season match despite playing well for good spells in it but loss of cheap goals to the opposition proved their down fall.

The early stages saw Carluke produce the first chance when a driving run by James Martin ended with him laying the ball in to the path of Ian Watt but the strikers shot went wide of the target.

The home side began to take control of the match though and only a good save from David Thomson in the visitors goal kept the scores level, Kello did however open the scoring in 26 mins when a shot from the right was touched by Thomson in to the path of Hampson for 1-0, this was followed a couple of minutes by another goal after a corner was not cleared and the same player stabbed the ball home for 2-0. 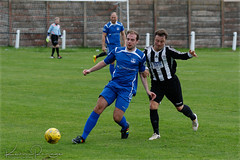 A Watt free kick produced a half chance for Robbie McNeish just before half time but again the effort went wide but it was the home side who rounded of the scoring when a corner was headed home at the back post by Shaw for a 3-0 half time score line.

Carluke did not learn the lessons of the first half and lost quick goals, both to Hampson to give a 5-0 score to the home side before they eventually got themselves back in to the match.

The first goal for Carluke came from a great run down the left by Martin before he cut in to the Kello box and laid a perfect ball in to the path of Watt for him to slam the ball home for 5-1, then Watt was unlucky to see a good shot from distance on the right go just over the bar.

The second Carluke goal came in the 79th min when a good shot from Cammy Browning produced a corner which was taken by Watt, Chris Lambie was quickest to react to force the ball home for 5-2.

The final chance of the match also fell to Watt but he was unlucky to see his shot go just wide of the goal.