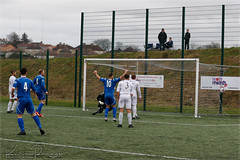 A crowd of 200 were treated to a combative and entertaining game from both teams determined to advance to the quarter final stage of the Scottish Junior Cup.

Gartcairn settled quickly and created half a dozen early chances from dangerous crosses into the Carluke box.

After 17 minutes Gartcairn took the lead when a deep cross from the right wing met the head of striker Ryan O’Donnell who rose above Carlukes Mark Haddow to head the ball across goal and past an outstretched Tobin in goal and into the right corner of the net.

Carluke began to settle after this and turned the game on its head after 30 mins when striker Ian Watt ran right across the 18 yard line and neatly floated a curling shot into the postage stamp corner of Gartcairn’s goal. 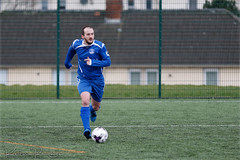 Just before half time Gartcairn were reduced to 10 men when veteran midfielder Mark Haddow was awkwardly challenged by Gartcairn’s John Henderson who seemed to go over the ball.

The referee showed a straight red card and Haddow had to be helped off the pitch being replaced by Chic McCole, Haddow looks certain to miss the replay.

Half time 1-1 with Carluke taking a numerical advantage into the second half.

Carluke started the second half less nervously and more patient in build up play and on the hour went 2-1 ahead following some fine one touch passing play around the oppositions box when the ball was passed back from Weir to Renwick who fired a 30 yard shot into the top right corner of the net.

Gartcairn fought back almost straight from the restart following the Carluke goal and were awarded a penalty following a rash defensive tackle.

Jordan Love dusted himself down and neatly placed his spot kick to the right of a fully stretched Tobin.

The stalemate remained and with 10 minutes to go a rash challenge from Carluke goalscoring hero John Renwick seen the referee produce a straight red card for his moment of madness.

Both teams looked to win the game in the last 5 minutes but neither could find the net.