The Rovers travelled to Fullarton Park to face Bellshill Athletic in their 2nd league match of the season, following a disappointing league opening defeat to Dunipace the Rovers were looking to bounce back and get some points on the board.

It was a lovely day for football and with the pitch in excellent condition it was all set up for a great game.

Having take 4 points from last seasons league games against Bellshill the team knew they were more than equipped to take something from this match.

With both teams missing some key players through injury it was the home side who came out the traps fastest, the Rovers finding it difficult in midfield and defence to handle the Bellshill attack.

It only took until the 10th minute and a ball which the defence should really have cleared fell loose and the Bellshills number 9 placed it into the net beyond the helpless Thomson in goal.

Bellshill continued to come at the Rovers defence and several high balls seen Thomson make some important interventions to thwart the threat and keep Rovers in the game.

Disaster struck in the 15th as the Rovers went 2 behind when a Napier clearance fell at the feet of Bellshills number 6, the shot being powered beyond an again helpless Thomson.

Rovers picked up their came and some good work by Smillie, Cavanagh and Watt created some half chances chances, none of which were taken.

An awkward challenge in midfield had the Bellshill management team screaming for a red card as Murphy went in clumsily on his opponent, fortunately the referee seen fit only to show a yellow, one of his better decisions of the day.

The Rovers best chance of the first half came in the 30th minute as Watt bore down on goal and played an inviting pass across the front of the goal towards an on rushing Cavanagh, however, this slid past the post before Cavanagh could get his foot to it.

A half chance fell to Craig Stewart but a last minute defensive header from the Bellshill defender ensured they kept their 2 goal advantage at half time. 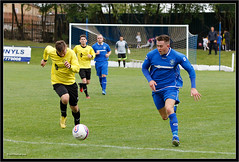 Colin Slater and his management team must have had a few choice words at half time as the team came out and started taking the game to Bellshill, creating several chances and pushing hard to get on the scoresheet.

Decent pressure from Rovers was threatening the Bellshill defence and it came to fruition on the 57th minute when Ian Watt picked up a ball on the edge of the box and fire it high into the keepers left hand corner, a valiant effort by the keeper to stop it.

The Rovers kept pressing and should have went on to bring the match level but it all went wrong 7 minutes later when a Bellshill corner was converted by their number 5 who got up ahead of the Rovers defence to head home Bellshills 3rd.

With Carluke on the attack it looked like Bellshill were happy to play on the break and feed their speedy young winger who caused problems from Murray and Co in defence.

With only 10 minutes remaining it was game over as Bellshill scored their 4th of the match to give them a well deserved 4-1 victory.

Can’t fault the boys for effort in the match but unfortunately we don’t get points for effort, next week it’s an away game against Maryhill where we have another chance to convert the effort into points on the board.