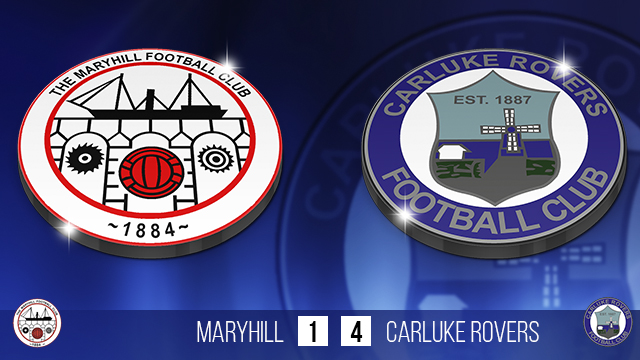 Carluke Rovers were looking to bounce back from two recent defeats and bounce back they did against a resolute Maryhill Juniors. This was an impressive 4-1 victory on a heavy pitch in blustery winds. There wasn’t a lot of attractive football on offer in the conditions but Rovers dug in and showed real commitment to the end. Maryhill also contributed to an exciting match and never gave up trying to get back into the game.

The match itself was only 2 minutes old when Carluke striker Eddie Haley broke through on goal but his tame shot was straight into the arms of the Maryhill keeper, Garry Black. This was an early warning for Maryhill as only 3 minutes later the same player scored the opener for Carluke.  James Frame took on the Maryhill left back and found the space to get in a great cross which Haley bulleted home from close range with his head.

This goal helped to settle Carluke and they looked comfortable in possession. Next up was Maxi Neossi who dispossessed a Maryhill player halfway in their half and drove through on goal and unleashed a shot which Black did very well to save.

Next up was Maryhill in the 36th minute when only the woodwork saved Carluke from conceding an equaliser. Jamie Gray got the ball at the edge of the Carluke box and was allowed to carry it forward placing his shot to the left of Adam Brown. The ball ricocheted off the post and was scrambled to safety. An escape for Carluke.

At this stage of the game Maryhill were edging it slightly and commanding  more of the possession in midfield in their attempts to get an equaliser. However the next opportunity fell to James Frame of Carluke who cut into the box from the right hand side and hit an angled shot which just missed Black’s right hand post going out for a goal kick.

The final chance of the half fell to Maryhill when a low driven cross from the right wing and was met by Sam McNee but his effort was wide of the post from 16 yards out. This was the last act of the first half and Carluke went in leading an evenly contested game 1-0.

There was still a strong wind as the second half started but it didn’t appear to benefit either side as it was swirling and constantly changing direction. The next goal in this game was going to be critical as Maryhill were certainly not out of it and an equaliser could change matters dramatically. However it was Carluke who were to get further breathing space with their second goal only 2 minutes after the restart. A great cross from Eddie Haley on the right was met by Carluke’s top scorer in recent games Jordan Conlon. Similar to Carluke’s first goal Conlon bulleted his header in from close range to make the score Maryhill 0 – Carluke Rovers 2.

This was not to be the end of Maryhill’s suffering as they were undone again 10 minutes later. This time by a piece of individual brilliance from Carluke striker James Frame. He got the ball out on the right wing and proceeded to cut into the penalty box evading three Maryhill players and coolly burying a left foot shot down to the Keeper’s left hand post to make it 3-0 to Carluke.

It only took a further 5 minutes for Frame to turn provider when he received a long ball out of defence and proceeded to run down the wing before crossing the ball into Jordan Conlon who controlled it before dispatching it past a stranded Black in the Maryhill goal from 12 yards. This was his second goal of the game and put a gloss on the scoreline at 4-0 to Carluke.

To Maryhill’s credit they did not let their heads go down and continued to work hard for each other right to the final whistle. Their efforts were rewarded in 73 minutes when a speculative shot from Jamie Gray, outside the box, managed to squirm under Adam Brown in the Carluke goal in the difficult conditions. The action continued to move towards both ends after that and Maryhill created a couple of half chances but the final result was never in doubt from midway through the second half and Carluke ran out comfortable 4-1 winners.