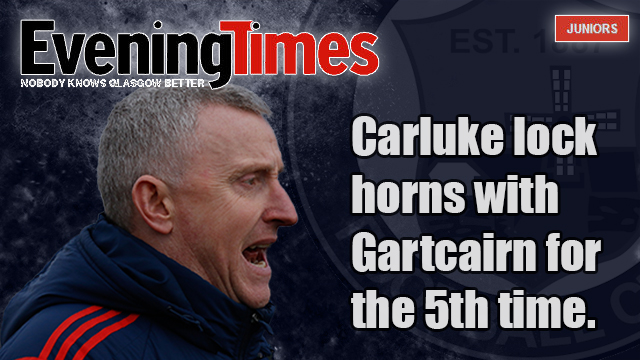 Locking horns for the 5th time.

Carluke Rovers Scottish Cup match against Gartcain is featured in the Evening Times as part of their juniors section.

NORMALLY a Scottish Cup draw away from home would be celebrated with no little elation by the visiting side’ however Carluke Rovers boss Colin Slater was seen to cut a frustrated figure in the aftermath of last Saturday’s 2-2 stalemate against Gartcairn.

And little wonder given the notable result was tinged with more than a little regret after his playing charges failed to make the most of facing a considerably weakened opponent…reduced to 10 men…following the 28th minute dismissal of John Henderson for an ‘over-robust’ tackle on Rovers midfield playmaker Mark Haddow.

Initially, all had looked to be going to plan when the Rovers went 2-1 ahead through a stunning John Renwick strike, however the home team bagged a quickfire penalty-kick equaliser to earn parity and came close to winning the tie outright particularly after Renwick went from saint to sinner with a scything challenge that earned him a red card.

So is the long-serving Carluke gaffer looking forward to yet another locking of horns with his club’s Central Second Division rivals – a fifth meeting of the season to date?

“We’ve certainly no reason to be running scared of the prospect,” revealed the former centre-back. “I think it’s fair to say we started poorly and Gartcairn held the upper hand over the early stages but Ian Watt’s equaliser lifted us and we were boosted further by the Gartcairn player getting his marching orders even though we were forced to replace the injured Haddow.

“But we just didn’t make use of our numerical advantage because the guys resorted to going too long with hopeful punts upfield and that made it easy for big Kevin Ross to shine at the heart of their defence.

“Nevertheless at 2-1 up, the guys were almost there but then we criminally conceded a penalty-kick within two minutes of taking the lead and that goal took the wind out of our sails while at the same time firing up Gartcairn whose own hopes soared when John walked for launching into an unnecessary challenge.

“No more goals were scored in the run-up to the final whistle but long before then Davie Greig and myself had settled for a second bite at the cherry.

“It’s a third time on the trot we will be going up against each other but Saturday was a great advert for the Juniors and a decent cup game into the bargain so I’m sure a big crowd will be in attendance hoping for more of the same.”

Word on the Carluke team front reckons experienced defender Renwick is set to be posted missing through suspension while Haddow is facing a race against time to be passed fit.

Slater added: “We can reshuffle things at the back to cover for John but Mark is extremely doubtful at best and we also have a worry over Mark Weir who never trained on Monday night because of a slight tweak in his hamstring.”

Said The one-time Queen’s Park hitman, who has bagged 22 goals this season, said: “It was a goal from the moment the ball left my foot and definitely meant.

“Yes there was an element of luck but if you don’t try then you don’t get in this game and I’ll be trying my best to get on the scoresheet again in the replay.

“We’re expecting a tough 90 minutes but hopefully the hard bit is done and we can do the business at our place.”

The visit through to the John Cummings Stadium is not causing seasoned boss Greig to have sleepless nights even though he is resigned to being without Henderson as well as experienced campaigner Lee McShane whose dismissal from the bench for his protests when Gartcairn claims for a penalty-kick were turned down is also set to incur a ban.

Greggy insisted: “The pressure is all on Carluke as they are favourites to come out on top playing at home but it must be a concern to big Colin that his players couldn’t see us off with a man advantage for almost an hour.

“Our guys are just delighted to still be in the cup and they have fully earned a second shot under the spotlight on account of the battling spirit and resilience shown in the first game.

“We are set to be further handicapped now if automatic suspension kicks in for John and Lee but if that’s the case then we’ll just take our medicine and go with what players we have available.”

“The club has made the fantastic gesture of laying on a free bus for supporters and hopefully the healthy crowd and great atmosphere at last week’s game is replicated again.”