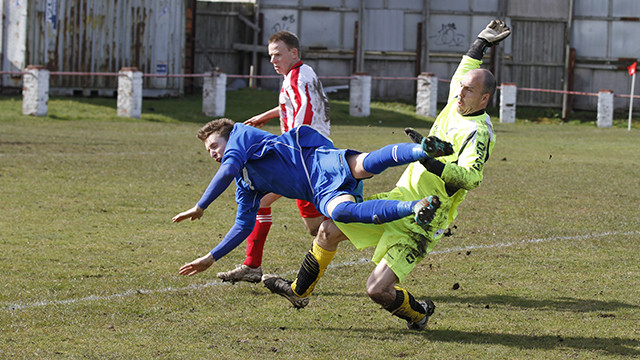 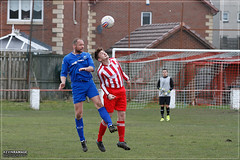 In what proved to be a bad tempered match Rovers continued their unbeaten run albeit with a hard earned draw.

The visiting Rovers conceded the opening goal to the home side in the 2nd min with another needless penalty given away by Mark Weir, Jonny Grier in the Carluke goal was given no chance with spot kick for 1-0 to Larky.

Almost straight from the kick off Rovers Ryan Smillie was unlucky with an effort that landed on the roof of the Larkhall net.

The same player was then unlucky to see a shot go just wide after build up work by Weir and Ian Watt.

Watt was next to have a couple of half chances as Rovers tried to get back on level terms but neither troubled the home keeper.

Larkhall had a better spell midway through the half and put the Rovers goal under threat with long balls and corner kicks but Grier was a match to anything thrown at him.

Rovers got back on level terms in the 39th minute when they forced a corner which although poorly delivered resulted in another on the Rovers right, Weir put in a good ball and this was bulleted in to the roof off the net by the Larky centre half for an equalising own goal for Carluke.

Larky had another chance to go in front just before the break but Stevie Murray was on hand with a great clearance as the ball looked net bound and the half time score was 1-1. 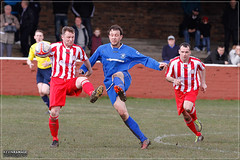 Carluke came out better at the start of the second half with Weir setting Watt up for a shot on goal which was well saved, then the rebound had an equally good shot from Smillie turned away as well.

These misses proved costly as yet another long ball from Larkhall caught the Rovers defence out and the ball was chipped over the head of Grier for 2-1 to the home side.

Yet again Rovers had to draw themselves back in to the match and the front pair of Smillie and Watt linked well in 60 mins but Watt final shot was just past the post.

It was a different outcome a minute later when a mix up between the home keeper and centre half saw the ball drop to the feet of Watt who took a couple of touches before placing the ball in to the net for 2-2.

This second equaliser should have seen Rovers take control of the match and they tried to again with the front pairing of Smillie and Watt linking up but the parting shot from Smillie was again wide of target.

In the 70th minute Rovers went behind for the third time in the match when yet another punt up the park by Larky saw Carluke appeal for offside which was not given and a cool finish made it 3-2 to the home side.

The match opened up a bit as Rovers chased a third equaliser of the day and Grier pulled off a fantastic save from Larky header to save the visitors from going two goals down. 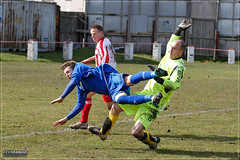 Rovers were having a bit of success down the left and Gary Gow put in a perfect cross but Gordon Murphy just failed to connect at the back post.

In the 85th minute Smillie was set free on the left and as he tried to cut in to the Larky penalty area he was brought down by the outrushing home keeper with a thigh high challenge that would have been a red card anywhere else on the park for any other player but inexplicably the young referee saw fit to only caution the keeper a decision that saw ugly scenes as the players of both sides clashed.

The end result saw the resultant free kick put out for a corner and as this was put in to the danger area Craig Stark rose above everybody to head home yet another equaliser for Carluke to make it 3-3.

The final action of the match came when Rovers forced yet another corner which ended with Jamie Dickson smashing a shot of the bar as Carluke looked to steal the points at the end.