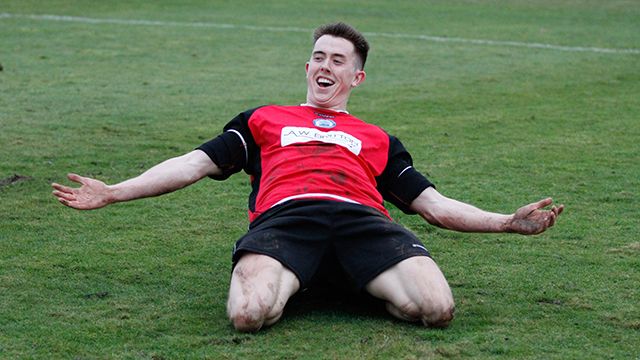 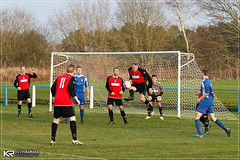 What a difference a week makes as Carluke Rovers went from the depths of a drubbing to the highs of thumping your nearest rivals.

The match was a wee bit slow to start with both sides testing each other but when it did it exploded in to action.

Rovers were being well served on the left by Gordon Murphy and Jamie Dickson but they did not trouble the Lanark defence too much.

In the 18th minute Lanark had a golden opportunity to take the lead when Murphy gave away a penalty with a rash challenge but the effort was struck against the bar before being cleared, this was followed 30 seconds later with another penalty award to Lanark by an over fussy referee who penalised a challenge by Mark Haddow.

Lanark changed their penalty taker and as he put the ball towards the Carluke keepers right keeper Jonny Grier brought off an excellent save to keep the scores level at 0-0.

22 mins saw Rovers have probably their first decent effort on goal when Ryan Smillie won a free kick which was taken by Ian Watt but his effort was tipped over the bar by the Lanark keeper for a corner. The same player then saw a low cross sent across the face of goal cleared for another corner.

In the 32nd minute the deadlock was broken when Lanark broke up field after a Rovers attack broke down and a good cross to the back post was headed home for 1-0 to the home side.

The visitors were not behind for long though as in the 34th minute they drew level, after a corner was played in Dickson had a shot from the edge of the box blocked but the loose ball fell kindly for Murphy who slotted the ball home for 1-1.

Carlukes chance of going in level at half time was lost in the 43rd min when a long ball from Lanark was played in to the box and the back post runner was again not picked up by the Carluke defence and the ball was knocked home for 2-1 to Lanark, a score that stood until half time. 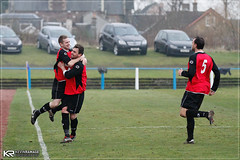 The start of the second half saw Lanark have a chance to increase their lead after a good break on the right but the parting shot went wide of target.

Rovers got themselves back on level terms in the 52nd minute when Murphy set Smillie free on the left and the striker cut in to the Lanark penalty area beating two defenders on the way before rifling a low shot from 16 yards which nestled in the net for 2-2.

This equalising goal saw the start of a great spell for Carluke and they saw another headed effort on goal from Haddow well saved after a free kick was played in.

The visiting Rovers took the lead for the first time in the 63rd min with as good a goal as you would see anywhere when Daniel Kindlan played a good quick ball to Watt on the right side of the park, the striker controlled the ball before looking to see the keepers position then hitting an excellent dipping shot in to the net from near the touchline fully 35 yards from goal for 3-2.

The Rovers lead was increased two minutes later with another superb goal when Daniel Kindlan went on a run from just inside the Lanark half beating a couple of defenders before unleashing an unstoppable shot high in to the net to make the score 4-2.

These goals spurred Lanark on and they took the game to Carluke and it took a couple of excellent saves from Grier from headers that looked certain to count to keep the lead at 4-2 for Carluke. 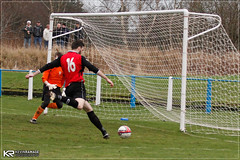 The last part of the match however belonged to Rovers as they made a few chances the first of which saw Smillie sent clear before being hauled down with a last man challenge but the referee chose to take no action, then Dickson set Daniel Kindlan free in 81 mins but his effort was well saved.

The final goal of the match came in the second minute of stoppage time when Smillie set up Murphy who saw his effort blocked but sun Greig Cavanagh was quickest to react and squeezed the ball home for 5-2 to the visitors from Carluke.