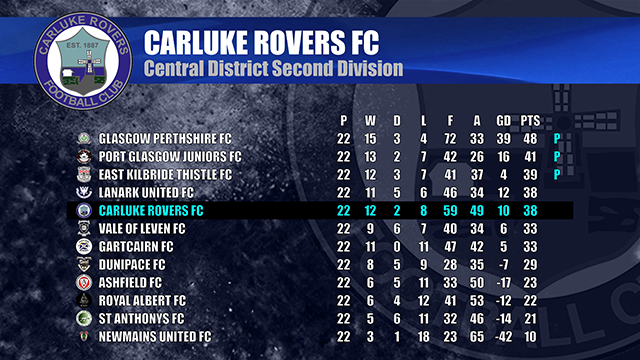 The Central District 2nd Division drew to a close today with the final promotion place being taken up by East Kilbride Thistle.

Everyone at Carluke Rovers would like to congratulate Glasgow Perthshire, Port Glasgow Juniors and East Kilbride Thistle who will next season be competing in the Central District 1st Division.

We came close this season but didn’t quite do enough to deserve promotion losing some vital points in games we would have been expected to win.

We look forward to the 2017/18 season and hope we can take the next step and return to the 1st Division.

Coming down from Central District 1st Division to join us next season are Johnstone Burgh, Bellshill Athletic and potentially Vale of Clyde or Lesmahagow Juniors.