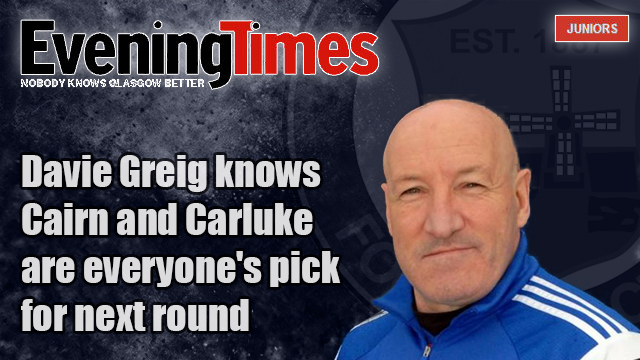 Everyones pick for next Round

Carluke Rovers Scottish Cup match against Gartcain is featured in the Evening Times as part of their juniors section.

THERE is no need for a crystal ball to find out the preferred quarter final opponent of all but two of the Scottish Junior Cup hopefuls taking part in crunch fifth-round contests tomorrow afternoon.

Nobody is predicting an easy ride into the last eight – not even Auchinleck Talbot supporters ahead of taking on Luncarty at Beechwood Park – but it’s coming across loud and clear that the winners of the all Central Second Division clash between Gartcairn and Carluke Rovers is everyone’s idea of a dream draw.

“Anyone saying otherwise is telling porky pies,” cracked Cairn boss David Greig last night ahead of the visit of a Rovers team who ran out 3-2 winners when the sides met in a league match just a fortnight ago.

Greggy had earlier in the evening met with an engaged tone when he telephoned and his wisecracking riposte to my revealing Carluke counterpart Colin Slater had been on the line at the time was to say: “Hopefully he was letting you know that Chucky [Rovers hitman Ian Watt] had picked up an injury and wouldn’t be fit to play tomorrow.”

No such luck for the seasoned gaffer who received a timely warning of the lively forward’s pace and striking qualities through the brace he notched in that John Cummings Stadium warm up.

Greig insisted: “Chucky has always been a very good player with an eye for goal and I have to admit he ran us ragged in the last game so it would be foolhardy for us not to take measures to try and put his gas at a peep.

“Carluke’s other goalscorer that day, Mark Weir, is someone I’ve forever rated as a top Junior and he doesn’t always get the credit he deserves, but there’s no doubt in my mind that when he is on form, Carluke are too.”

Gartcairn, in only their second season as a Junior outfit, find themselves in unknown territory as a last-16 survivor but not Greig, who famously headed up St Roch’s when they met Auchinleck Talbot in a fifth-round showdown in 2012 only to lose 5-0.

He said: “I cannot promise Gartcairn will avoid a similar heavy defeat but it’s no disrespect to say Carluke are not an Auchinleck, and I fancy we are capable of coming out on top if we can control our emotions and don’t let the occasion get to us.”

“A great week’s training has the boys raring to go and make the most of this opportunity to create a bit of history.

“There are one or two guys with niggling knocks but they will declare themselves fit once they waken up tomorrow and the adrenalin kicks in.”

Greig promoted youngsters Luke Tuite and Josh Moore from Gartcairn’s youth academy for the defeat of Hermes in the previous round and he is holding true to his vow that others are in the pipeline by bringing goalkeeper Liam Tuite and Dillon Walker into his playing squad for the MTC Stadium encounter.

Greig added: “Bringing in these young lads shows there is a pathway into the top team at this club for anyone showing the necessary talent and commitment.”

Visiting manager Slater is urging his players to clinch a quarter-final place for veteran campaigner Weir.

Slater said: “It’s pleasing to hear Davie pay compliments to Mark, who fully deserves any praise that comes his way.

“He along with Garry Gow, John Renwick and Mark Haddow make up the experienced heads likely to feature tomorrow and I’m looking for their influence to bring out the best in what is otherwise a very youthful bunch, with Stirling Albion loan signing Alberto Vezza the youngest at just 17 years of age.

“Nobody has earned his day in the Scottish Cup spotlight more, as this is Mark’s 16th consecutive season with Carluke. But he knows better than most from his time in the game that sentiment doesn’t get you a place in the cup’s latter stages.

“It has to be earned by sweat, attitude, talent and a bit of luck into the bargain. So hopefully the guys can get their act together tomorrow and do the business.

“Our recent 3-2 victory is a potent reminder of the effect Davie Greig has on teams because we were 3-0 to the good at half-time and coasting until he got talking during the interval and the game was turned on it’s head as Gartcairn came back to score twice and almost earn a draw.

“They will fancy their chances of turning us over and I can well understand why because this is one game that will be close to call.

“I reached the quarter-finals once in my own playing career with the Glenafton side that lost to Johnstone Burgh in 2000 and it was a fantastic experience which I would love to see my players – and of course Mark Weir – get to savour for themselves.”

The prospect of a last-eight clash against his former Ayrshire club cannot be ruled out as the Glens are firm favourites to emerge winners away to another of the Scottish Cup lesser lights, Dunbar United.