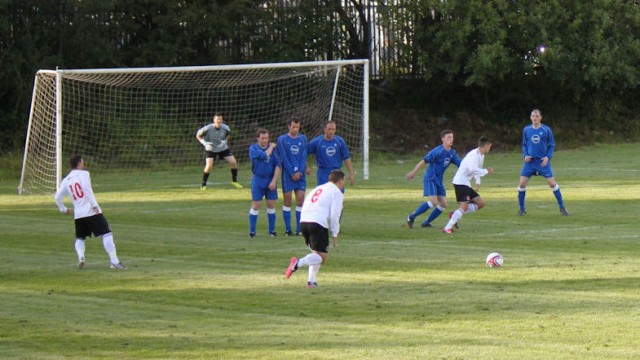 Almost all that could go wrong on the night went wrong for Carluke Rovers in this tie. Rovers started with young keeper James Teece in goal and he looked in good form despite losing a goal in 6mins but in saving a penalty harshly awarded against Gary frame he was injured and had to come off to be replaced by sweeper Dan Napier in goal.

Carluke tried to get back in  to the match with Willie Souter linking up with Ian Watt but Watt’s cross found no takers. A second penalty to Bankies for a soft foul by Scott McGeachie was scored to give a half time score of 2-0 to the home side.

The second half was only minutes old when Bankies made it 3-0 and Napier brought off a good save in 49 mins to prevent this lead being stretched. A weak shot from com back man JC savage in 55 mins was all the early second half pressure Rovers could muster before a 4th Bankies goal went in.

Amazingly another penalty was awarded to the home side in 60 mins with the added harsh sending off of Frame to further compound Rovers misery, this was scored and goals in 66 and 68 mins made it 7-0 before Craig Stark set Dean Kindlan free on goal and a cool finish from the striker gave a consolation goal to Carluke.

The scoring was rounded off in the 87th min to give a final score of Clydebank 8 v 1 Carluke Rovers.