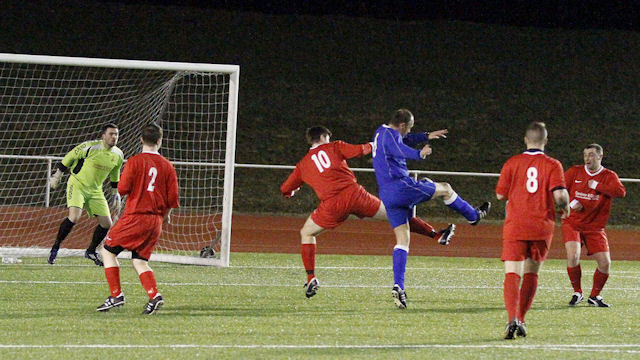 The match was a slow starter but livened up and ended in a good seven goal match.

The first chance of note fell to Forth when they picked up on a poor challenge in midfield from Rovers but the effort was just past the post, then they saw a shot come back off the bar before Rovers took control off the match and indeed went in front.

Carlukes chances started when Craig Stewart was set free by Greg Cavanagh and Stewarts cross found Cavanagh at the back post but his effort was wide of the upright.

In the 18th min Scott McGeachie set Ian Watt free on the right and his cross was just missed by Craig Stark as he went in on goal, the opener was only slightly delayed though and it was indeed Stark who got it with an excellent volley after being set up by good work from Stevie Murray, Gordon Murphy, Cavanagh and an excellent cross from Stewart in what was a great move through the side for 1-0 after 21 mins.

This effort saw Rovers best spell of the match and they doubled their lead in the 22nd min when another good ball from wide saw Cavanagh show great control before his low drive made it 2-0.

This lead was increased further in the 24th min when a ball over the top found Dean Kindlan whose lay off in to the path of Watt looked to pose no threat but a superb dipping shot from him flew over the head of the Forth keeper for 3-0.

This burst should have put Rovers on easy street but poor marking allowed Wanderers to get a goal after 28 mins for 3-1. Ex Forth man Murphy thought he had restored the 3 goal cushion but his shot came back off the post after he was set up by Cavanagh in 35 min. The second half saw Wanderers come at Carluke early on before Rovers eventually got control back as they pressed firstly through Murray who saw his shot just past the post after being set up by Mark Haddow, but he was not to be denied a goal which came in the 73rd min when he headed a Mark Weir corner home for 4-2.

Carluke had welcomed the return of Jamie Dickson in the later stages of the match after a long spell out injured and he was unlucky not to increase the lead further when what looked to be a net bound effort hit Murphy before being cleared by the Forth defence.

The match scoring was rounded off by the man of the match Greg Cavanagh in the 90th min when he picked up a lay off just outside the Forth area before a quick turn and a cool low finish in to the corner of the net made it 5-2 to the Rovers.