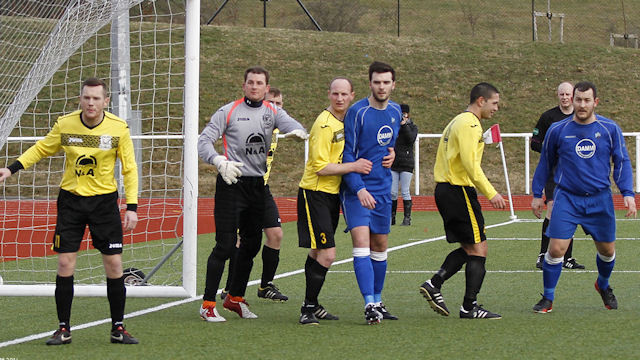 In this replayed match caused by the horrendous leg break suffered by Scott Bellew in the first match between the sides in November the unthinkable happened when the match was abandoned again , this time with only very little more time having been played.

The opening goal of the match came from probably the first chance of the match when after Ian Watt had forced a corner on the right it was played in perfectly by Mark Weir for his namesake Mark Haddow to head home unchallenged probably without even having to jump, for 1-0 to the home side.

Possibly the only chance created by Bens came from a mistake from Marc Napier in the 14th min which allowed a break down the right but the cut back was caught by the wind and was cleared by Carluke. As the half wore on Carluke pressed forward with the wind at their back and Watt first had a shot cleared before Greg Cavanagh then saw an effort cleared off the line and out for a corner. The corner was played in by Watt and a Stevie Murray effort went over the bar as another chance was lost.

With the Bens keeper still struggling to get any distance on his kicks the referee eventually took the decision to abandon the match after 29 mins when one effort went high towards half way before being blown almost back to the keeper.

Not a popular decision by the Referee but probably the correct one that sees us need a third home match for Carluke against Bens in one season.