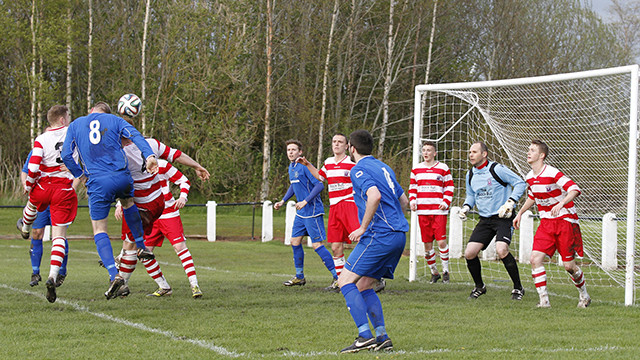 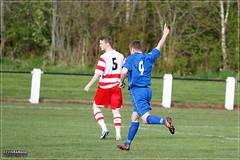 It was the Rovers final match of the league season. A win was required to ensure the Rovers could set a decent points tally that would make it difficult for the chasing pack with several games in hand.

The Rovers got off to a fantastic start as just 7 seconds from the whistle Ian Watt was through on goal and lobbed a delicate shot over the Lesmahgow goalkeeper.

The good start continued with some good pressure from Carluke, Watt coming close again on a couple of occasions and Gordon Murphy beating the Lesmahgow keeper with a well placed header only for the referee to spot some sort of infringement.

Carluke continued to push against a lacklustre Lesmahagow defence and their pressure paid off in the 23rd minute, with Cavanagh through on goal he finished calmly, slotting the ball past the advancing keeper.

Both teams threatened each other goals with no real danger to either keeper but again the pace of the Rovers attack caught out the Gow defence again on 40 mins as Smillie went through on the keeper and easily rounded him and walked the ball into an empty net. 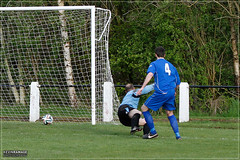 It should have been game, set and match at this point but the Gow number 10 from just inside the box slotted a fine shot past the Rovers defenders and into the corner of Griers goal.

With only a few minutes remaining in the first half the Gow must have though they were back in the game but just 2 minutes later young Watt placed another fine shot past the Gow keeper for his 2nd and Rovers 4th.

Lesmahagow came out for the 2nd half obviously motivated by their managers 1/2 time team talk as they took the game to the Rovers forcing the Rovers defence onto the back foot time after time. 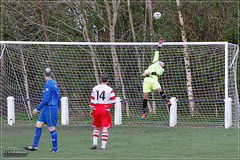 It only took 4 mins of the second half when the Gow number 9 prodded the ball past a helpless Grier and Soutar.

The Gow took heart from the goal and threatened on several occasions with it looking likely another goal may follow at any time.

The Rovers restored their 3 goal advantage in the 79th minute with a fantastic free kick from the edge of the box by Watt, a fantastic strike leaving little chance for the Gow keeper.

On 83 minutes a fantastic dipping strike by Lesmahagow called Grier into action as he had to pull of a fine save and tip the ball over the bar.

With the match almost at a conclusion a long ball from defence reached a suspiciously looking offside Smillie, claims from the Gow defence went unheeded by the ref and Smille playing to the whistle moved into the box and slid a fantastic finish past a helpless goalkeeper to complete a fantastic 6-2 victory for the Rovers.

So the Rovers league season ends with a fantastic 6-2 victory and at present 2nd place in the league, its now a matter of wait and see what the others do with their games in hand.