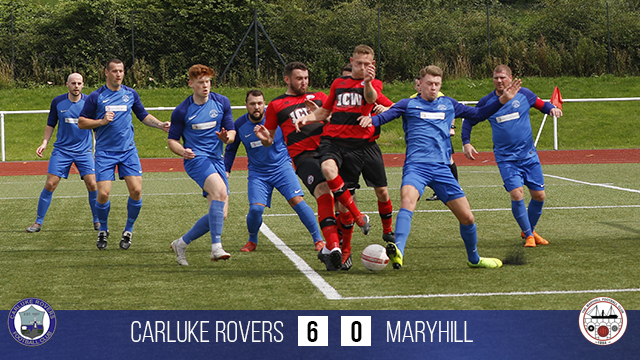 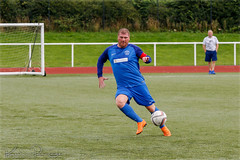 The season opener for the newly promoted Carluke was played against Maryhill Juniors at an unusually warm and pleasant John Cumming Stadium. The last time these two played each other in league action was 3 years ago when the Glasgow outfit defeated the Rovers 2-1. That was the start of a run of three successive defeats which would result in Carluke’s relegation from the former Central Division 1. If the current crop of players were aware of this, and only the veteran captain Weir, and defender Lowdon were survivors from that team, they certainly didn’t take long to consign that result to the archives.

No more than 2 minutes were on the clock when Lafferty’s quick feet gave him space on the edge of the visitor’s box. A quick shot was spilled by the Maryhill keeper Black and Donaghy looked as if he was about to open his account for the season, however, the Maryhill stopper was quick to his feet to deflect the shot and the ball sailed past the right-hand post for a corner.

Five minutes later Donaghy was again thwarted when his shot from the edge of the box was blocked. The deflection fell to captain Weir, but his shot sailed harmlessly over the bar.
Carluke were keeping the visitor’s defence busy and chances were coming easily for the home side.
On 8 minutes MacNeill passed through the Maryhill defensive line for Lafferty to run on to and put him one on one with keeper. His early shot looked as though it might be good enough to open the scoring, but once again the Maryhill keeper kept the scores level with a fine save.

Donaghy was winning most of his battles down the Rovers right. On 11 minutes his strong tackle in midfield was rewarded when the ball ricocheted off him and gave him the opportunity to run clear of the static defenders. One on one with Black again he tried to chip the oncoming keeper, but his attempt was easily parried and gathered by the Maryhill stopper. 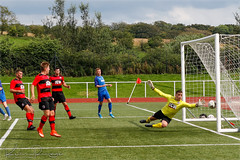 The Rovers were finally rewarded for their efforts in the 14th minute when Weir was at the end of a pass in the visitor’s box and he calmly stroked the ball into the bottom left hand corner to give his side the lead.

Maryhill thought they had equalised on 18 minutes after a mix up between Cassidy and Terry when he was shepherding the ball back to his keeper. Pressure from an incoming Maryhill forward resulted in the ball being missed by Terry and the Maryhill man ran on to the loose ball and put it between the Rovers posts. Fortunately, the referee determined that Cassidy had been pushed and the goal was not given.

Donaghy continued to torment the Maryhill defenders. His endeavours were rewarded when, on the 20 minute mark, he easily outpaced the Maryhill left back and fired in an inch perfect cross into the box, which Lafferty rose to head into the back of the net from just outside the six-yard box. This however was Donaghy last real contribution to the game. Five minutes later he limped off holding his hamstring to be replaced by McDonald.

Donaghy’s departure seemed to encourage the visitors and Carluke’s dominance waned somewhat and the game trundled to half time without either team having much success going forward.

Carluke started the second phase looking as though they wanted to put the contest to bed. One minute into the half and McKenna easily moved through the visitor’s defence and fired off a shot which looked net bound but was tipped over the bar by Black in the Maryhill goal.

The visitors, understandably, had decided at half time that changes were necessary, and consequently they moved to a more aggressive formation with three forwards up front. The tactical move certainly benefitted the visitors and they dominated play for the first 10 minutes of the second half.

The Carluke management team addressed the threat by changing to a conventional four man defence and this seemed to return the dynamic of the game once again in favour of the home side.

On 56 minutes the Rovers extended their lead. A free kick on the right, 5 yards outside the Maryhill box could only mean one thing. A Mark Weir left foot strike, and he duly obliged. However, with the home support, and possibly also the visitors, looking for the iconic postage stamp delivery, the Rovers captain spotted an opportunity at the unmarked Maryhill left post. His perfectly placed shot almost trundled into the net at the bottom of the post for his second of the day and Rover’s third. With his job seemingly done for day he was replaced by Neossi on the hour mark. 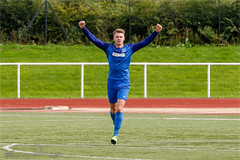 If Weir’s strike hadn’t secured the points for the Rovers, then Grierson’s strike on 70 minutes certainly did. A poor clearance out of defence from Maryhill was pounced upon by Grierson and he quickly outpaced the Maryhill midfielders trying to close him down. An early, and sublime strike as he raced towards the visitor’s goal was enough to catch out the Maryhill keeper and the Rovers were four up.

A minute later it looked as if the home side could extend their lead. A clearance from Maryhill was picked up by MacNeill who ran at the beleaguered defence. He managed to avoid a clear attempt to kick him as he ran for the goal line. His cross was fired across the Maryhill six yard box, however the pace of the ball was too much for the ever present Lafferty and Maryhill were able to scramble the ball clear.

Carluke continued to press, and when they were awarded a corner on the right their fifth goal was scored by McDonald. The corner was taken by Mckenna who fired it to the back post where McDonald rose well above the static Maryhill defenders to head home the fifth. McKenna was immediately substituted to be replaced by Lowdon, the other survivor from the last Maryhill/Carluke League fixture.

With five minutes left on the clock Lafferty ran on to a pass on the right hand side. In the box he fired his shot easily past Black in the Maryhill goal for his second, and the Rovers sixth, and final goal.

In the last minute of the game Maryhill looked as though they might find a consolation goal when a cross found a Maryhill forward unmarked in the box. However, as he prepared to volley the ball into the Carluke net a timely intervention by the outstretched foot of McAllister snuffed out the last chance of the game.

A marvellous start to the Rovers league campaign, which propels them to the top of the League One table. They head to Larkhall on Wednesday who were 4-3 victors away to Girvan in their opening fixture.