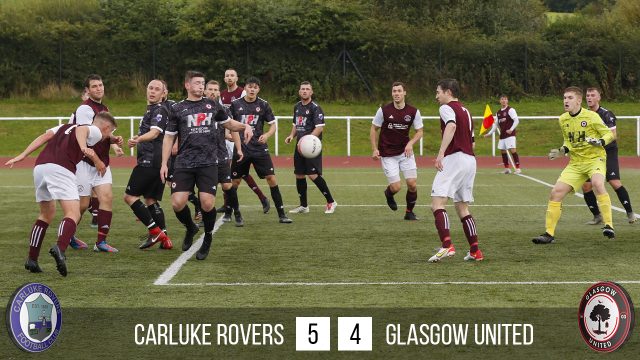 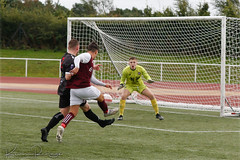 Carluke kicked off with the wind at their back but it was Glasgow who settled quicker and were looking more dangerous early on. In the 9th minute a calamity in the Carluke box gave Glasgow the lead. A corner came in from the right and and was headed goalbound. Marc Smith was on the line but in clearing it he hammered the ball off Greg Kane, who was only a few yards off the line himself and it ricocheted back into the net for an own goal. 0-1.

The goal further lifted Glasgow and they started to knock the ball around well playing with the confidence reflected in their unbeaten run. Carluke weren’t without their chances though and another long range effort from last week’s goal scorer, Dominic Small, was just over the bar.

That effort was only to be a brief respite for Carluke as in the 17th minute a long ball from the right hung in the air before finding Ross Barclay of Glasgow at the back post. He took the ball on the volley and side footed a great effort over keeper Dean Wilson to the far post where it nestled in the back of the net. 2-0 to Glasgow.

In past matches The Rovers heads have went down and they have suffered a heavy defeat but there is a renewed confidence about the team and they continued to try and find a way back into the game. In the 25th minute a freekick from James Frame narrowly flashed past the Glasgow post and then in 36th minute the game turned. The same player was cynically felled by Glasgow’s Anthony Dempsey just inside the Glasgow half. The tackle was so reckless that the Referee immediately brandished the red card to Dempsey reducing Glasgow to 10 men. There was to be no more scoring in the first half but the sending off had given Rovers a lift and they knew they had to capitalise in the second half. 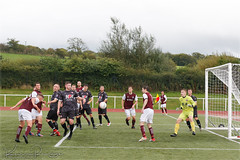 Carluke Rovers made some tactical changes of personnel at half time to freshen things up as they tried to claw their way back into this game and it appeared to be working when in the 54th minute Dillon Duddy scored. He collected a through ball on the right and bore down on goal and just as he was challenged he got his shot off pulling it across the Keeper into the far post to make the score 2-1 to Glasgow.

Carluke’s tails were up now and they started to apply more pressure to the Glasgow defence. In the 58th minute a Marc Smith shot was deflected over the Glasgow bar but from the resultant corner Carluke got their equaliser. A pinpoint corner to the back post from Duddy found Greg Kane unmarked and he nodded home from close range to make the score 2-2.

Although pegged back Glasgow were still very much in the game and were hitting Carluke quite effectively on the break. However the goal that Carluke conceded to relinguish the short lived lead in the 61st minute was poor. An innocuous long ball clearance down the middle by the Glasgow Keeper was allowed to bounce and was not intercepted. The ball reached Jordan McGrotty and as he took the ball round Keeper Dean Wilson he was fouled and a penalty awarded. To Keeper Wilson’s credit he nearly saved the spot kick but it crossed the line giving Glasgow the lead back at 3-2.

At this point it was end to end and the goals just kept on coming. Next up was Dillon Duddy to get his second and Carluke’s 4th. A long cross field pass by Carluke’s centre half trialist found new signing Christy Lawlor and he flighted a lovely cross into Duddy who rose unchallenged to nod the ball home. 3-3. 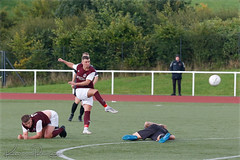 To Glasgow’s credit they never let their own heads go down and good play in the midfield saw the ball fed to Ross Barclay and he hit a great 25 yarder which gave Dean Wilson no chance in the Carluke goal as it found the top corner. 4-3 Glasgow.

Back came Carluke in the 77th minute. A corner from the right was partially cleared to the edge of the box where it was challenged for by Greg Kane. It looked like a free kick but the Ref played on and the ball fell to Marc Smith who took no time to pick his spot high in the net to score from the edge of the box. 4-4.

Both teams went in search of the winner but it was James Frame who produced some magic down the right wing. He beat a couple of players and got to the bye line. He then cut the ball back to striker Dylan Dailly who had the easiest of goals from 6 yards out to make the score 5-4 and put Carluke ahead for the first time in the match.

With the goal coming in the 90th minute there was no time for Glasgow United to hit back and the final whistle was met by cheers and much relief from the Carluke faithful in the stadium.

This was another excellent result for Carluke Rovers and extends their league victories to 3 in a row. Next week it is a difficult away fixture to league leaders Cambuslang Rangers but the team go there with some confidence.