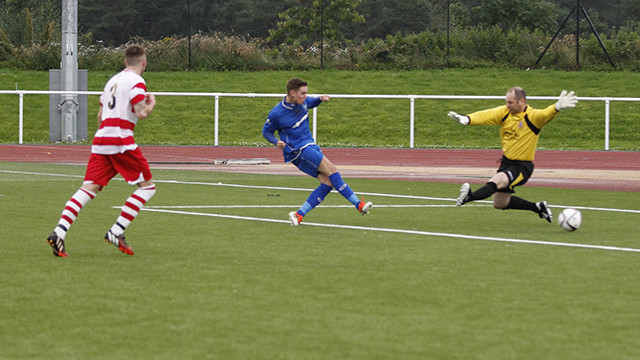 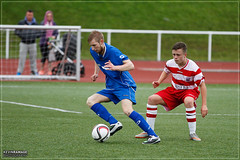 On a wet and miserable night neither side offered too much to brighten the mood in a closely fought Clydesdale Cup tie.

The first chance of note fell to Rovers but Ian Watts free kick was well over the Gow bar before Lesmahagow themselves created a chance down the left but again the shot was high of the target.

The scoring was opened in the 14th minute when Lesmahagow won a corner which when it came in saw no Rovers cover and an easy header made it 1-0.

The home side levelled the scoring with the next attack when Garry Gow and Jonny Wilson linked well on the Rovers left and Gow’s cut back was driven home by Ryan Smillie for 1-1. 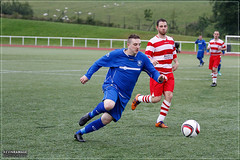 The game was very scrappy for long periods before Smillie set up a chance for Wilson but his parting effort went wide of the target.

The visitors took the lead for the second time in the match in the 37th min when Carluke were looking for a free kick that did not come and as the ball fell to the Gow right back he hit a shot which deflected wickedly off a home defender before beating Grier in the Rovers goal for 2-1.

The last chance of the half fell to Mark Weir who saw his free kick hit the post before going past for a goal kick.

The second half saw Rovers try to get on level terms from the off and Watt robbed the Gow keeper in the 54th min on the bye line but his end shot hit the post before being cleared. 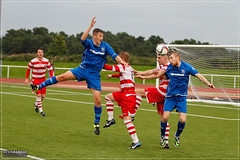 Lesmahagow should have been two goals clear in the next attack but they missed a glorious chance with the goal gaping.

The scores were levelled in the 63rd min when Watt made good progress through the middle of the park before he got a shot in on goal which was saved by the Gow keeper, but Smillie was first to react and hammered the ball home for 2-2.

There were very few chances for the remainder of the match and the tie went to a penalty decider with successful penalties coming from Weir, Souter, Haddow, Smillie and Watt but misses from Dickson and Wilson allowed Lesmahagow to win 6-5 to go through to the final on Monday.