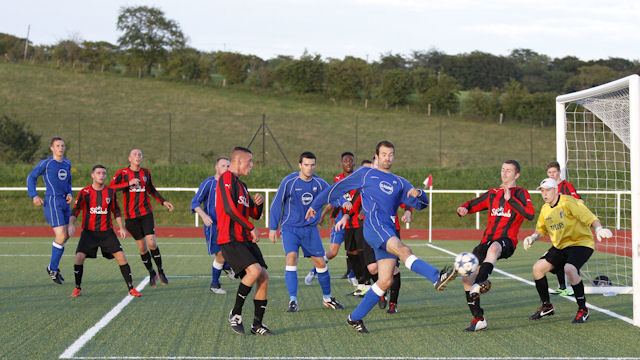 Was it a record? We will have to consult the history books but it is certainly a long time since The Rovers have posted a score like this. The home side were on the front foot from the start with Gordon Murphy linking up well with Jamie Dickson but his cross from the right found no takers, this was followed by Craig Stark setting Darren Hamilton up with a header but this effort went wide of goal.

The 13th minute saw the easiest chance of the match fall to Stark from a corner but somehow he managed to put the ball over the bar from 3 yards out blaming the sun in his eyes for the miss. The first goal however did come from Stark a minute later when a Dickson corner found him clear at the back post to strike for 1-0 to Carluke. It should have been 2 in the 19th min but despite being clear on goal Stuart Arnott saw a poor chipped finish cleared. The second goal came midway through the half when good work on the left saw Murphy find Arnott at the back post and his touch across goal found Mark Haddow waiting to double the home sides lead.

In what was their only threat of the first half it took Craig Brown in the Rovers goal to tip a shot on to the bar to keep Newmains out. The final action of the first half saw a corner from Murphy find Haddow and his effort across goal was helped on by Hamilton for his first of the night to give the home side a 3-0 half time lead. The second half saw more of the one way traffic and in 49mins good work from Haddow and Dean Kinlan set Arnott free and his cool finish made it 4-0, Arnott then combined with Hamilton to allow Hamilton his second of the night to make it 5-0 after 57 mins. This goal broke down any thoughts of resistance from Newmains and in 67 mins Murphy crossed from the left for Hamilton to get his hat-trick and Carlukes 6th of the night.

This lead allowed Carluke to use their bench well and it was two of the subs who linked up well fro the 7th home goal when Dan Napier set Gregg Cavanagh up in the middle of the park and with good footwork the big striker lost his markers before firing low in to the net for 7-0 to Carluke. The scoring seemed to be at an end for the night until yet another excellent ball in from the left by Murphy found Napier and his stunning finish made it 8-0 after 83 mins.

In 85 mins Napier was again involved when he played a one-two with Hamilton with Hamilton providing the finish for his 4th and Rovers 9th of the night. With Newmains now looking to end the match as quickly as possible Cavanagh set Scott McGeachie clear on the right and his cut back was put in by that man Hamilton for 10-0, and a minute later the same player scored after a corner to give him a 4 minute hat-trick his second of the night as he got his 6th and Carlukes 11th goal of a quite incredible night of scoring at the John Cumming Stadium.