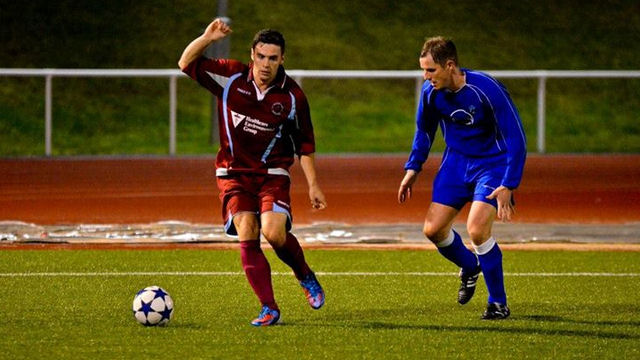 Early on the match was a good even contest with Gavin McLachlan having to make a good save for the Rovers to keep the score at 0-0. The deadlock was broken in the 36th minute when Ian Watt was free on the left with a ball from Davy Gray and after cutting inside he hit a right foot shot from distance which deceived the Shotts keeper before ending in the net for 1-0 to the home side, a lead they held until half time.

The second half saw the home side start well enough making a good chance from a Mark Weir corner when Scott McGeachie headed on for Craig Stark but the final effort was wide of the target. Missing this chance proved costly when in the 53rd min  the scores were level, McLachlan in the home goal made a good stop from a long range shot but the effort was not cleared and the loose ball was driven home for 1-1.

From the kick off Carluke went up the park with good work on the right from Craig Stewart and JC Savage before Stewart put in a good cross to Dean Kindlan but his effort slipped past the post.

Shotts took the lead for the first time in the match when poor defending allowed an opening to make it 2-1 then and unstoppable shot after 62 mins made it 3-1 to the visitors. Carluke fought their way back in to the match but still could not take the chances they made when in 65 mins Kindlan saw a header go just past the post from a corner then after beating three Shotts defenders watt saw his parting shot go just past the post in 69 mins.

As opposed to Carluke Shotts made almost every chance they got count and they stretched the lead even further in the 76th min after Rovers lost the ball in midfield. The last ten minutes of the match saw more of the same from Carluke when chances were set up for Kindlan, and twice for Stewart but none of these were taken and the match ended with a 4-1 score line to the visitors from Shotts.