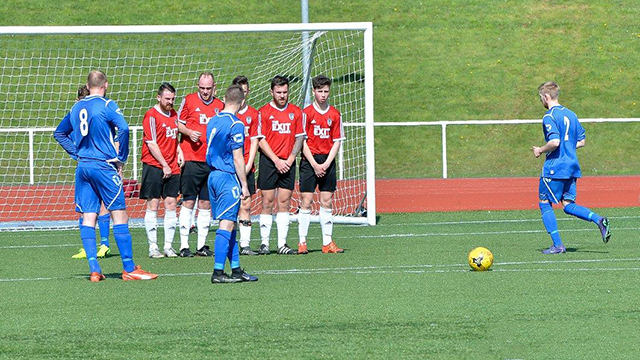 Carluke probably got as much as they deserved from this very poor performance which was absolutely nothing against bottom of the league side Newmains.

The game itself started very slowly for both sides with the first action for the home side coming from a Sam Biggart corner that was cleared by the visitors defence.

Biggart was again involved a few minutes later when his cross was headed home by Lewis McDougall but he was adjudged to have been off-side, a minute later on 16 mins good work from Alberto Vezza saw him get a strike on goal but the shot was well saved.

The home side took the lead in the 25th min when Ian Watt was brought down on the edge of the box and he struck the free kick himself low in to the net for 1-0, the only other action of a poor first half came when a Jonny Wilson free kick was headed goalwards by Mark Haddow but the effort was again well saved.

The second half started just as slowly as the first with Newmains probably just shading the best of it before Carluke created the first chance of the half on 62 mins when a ball over the top found Watt but his low shot was well saved.

Dan Tobin in the home goal was brought in to action in the 66th min when a mistake at the back allowed Newmains through.

Good link up play in the 68th min fashioned a chance for McDougall but a touch saw his effort diverted on to the post before being cleared.

The visitors drew level in the 76th min when they won a free kick 25 yards out that took a deflection as it went past Tobin for 1-1.

The winning goal came in the last minute when Watt drove forward for Carluke but his low cross was missed by the Rovers attack and Newmains broke down the right to score for 2-1.