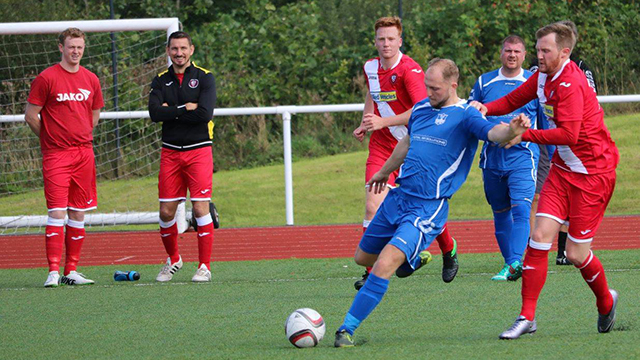 Rovers slipped to a second league defeat in a row with this poor performance at home and have given themselves a hard task to catch up with the pack.

Carluke started off slowly and had Daniel Tobin make a good save after 7 mins with John Renwick completing the clearance, a couple of minutes later Ashfield were clear again with Rovers looking for off side but a poor final chip allowed Tobin to save again.

It took until the 16th Min for Carluke to produce a chance of their own but Lewis McDougalls shot was turned away for a corner, then he set up Ian Watt for a chance but his left foot finish was weak and easily saved by the visiting keeper.

Ashfield took the lead in the 21st minute when they won a corner on the right and a front post ball was struck home by Moulangou for 1-0.

Rovers only other chance of this poor first half came when a Watt effort went out for a corner then when he took it quickly to Mark Weir, Weir put a tempting ball across goal but Carluke could not get anyone on the end of it.

Carluke did start the second half a bit brighter with Jonny Wilson and Scott Burns linking well as Wilson progressed in to the Ashfield penalty area where he was upended but no penalty was forthcoming for Rovers.

Watt set up Carlukes next chance when his good work on the left saw him feed Stuart Mitchell but his effort was saved again by the visiting keeper.

Rovers task to get back in to the match was not helped in 60 mins when Weir was sent off for a second caution but they did in fact get the next goal when McDougall set Watt free with a good ball and from the right of goal Watt fired in an unstoppable shot high in to the net for 1-1.

Ashfield stepped up the pace from this point and Tobin brought off another good save with Renwick clearing the ball off the line before Ashfield then missed an open goal with the chance of the match.

Carlukes final chance came when they worked a corner back to Watt but his effort was high and wide of target.