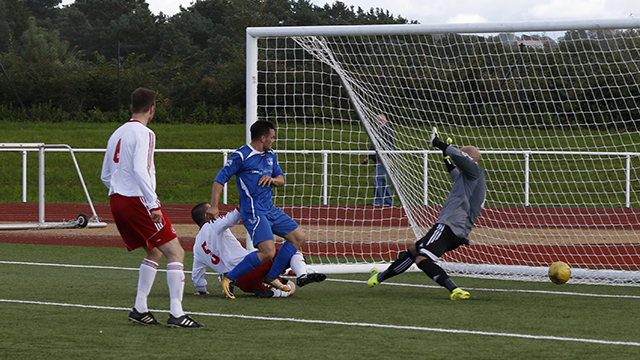 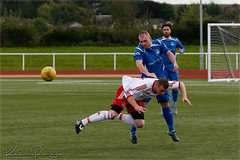 The visitors started well and always looked as though they were the side most likely to score first.

They controlled much of the play in the first half and constantly pressed Carluke.

The Rovers had a trialist keeper between the sticks and he kept the scores level in the opening 20 minutes with a couple of fine saves.

Vale of Clyde opened the scoring in the 21st minute when they were given a free kick 10 yards outside the Rovers box on the left hand side.

A fine strike by Campbell meant the Rovers keeper had little chance of saving the shot.

The Rovers almost levelled the score immediately after the restart when a shot by Watt from just inside the Vale box struck the outside of the left hand goalpost.

Urged on by their home support the Rovers continued to press for an equaliser.

A corner from the right in 26th minute created three chances to draw level.

Unfortunately stout defending from the visitors meant the chances were squandered.

On 30 minutes Carluke’s Cassidy was injured and had to be replaced by the Rovers latest signing Haley. 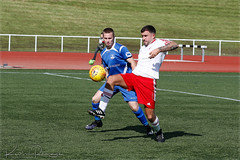 After the break the Rovers started brightly and their chances improved in the 48th minute, when Vale substitute, number 12, who had been on the park for less than a minute, recklessly tackled Carluke’s Renwick and was sent off.

On 54 minutes the visitors almost doubled their lead when a weak clearance by Carluke was returned to an empty Rovers goal.

Fortunately Renwick managed to get his head to the ball and cleared the danger.

A couple of minutes later Greg Kane found Haley with an excellent pass and his subsequent shot almost levelled the score.

Rovers play at this point was promising and an equaliser looked to be on the cards.

An excellent run by Watt down the right wing and into the box ended with a pass to Haley, who narrowly missed at the front post.

On the hour mark the visitors were unlucky when a shot by McCue, who was probably their best player on the day, struck the Rovers crossbar. 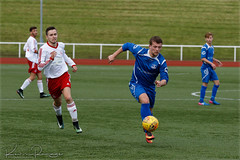 An excellent clearance from Gow found Watt on the right. His powerful run through the Vale defence to get to the bye line allowed him to fire a shot to the front post where Haley finished well to put the ball past the visitors keeper for the Rovers equaliser.

The goal spurred the Rovers to pursue another late winner and the industrious Watt once again crossed from right to find Lowdon whose header was blocked and Renwick shot the clearance narrowly wide.

With 10 minutes left a rare Vale breakaway to the Rovers goal line resulted in a foul on Gow by the Vale forward.

An innocuous tussle followed with Gow on his feet and the Vale forward on the ground, which the referee judged to have been violent and Gow was red carded.

Watt continued to cause the Vale defence problems down the right and on 83 minutes a cross found Vezza whose shot skimmed the upright.

A game of two halves but the draw keeps Rovers top of the table and looking forward to the local derby with Lanark next week at Moor Park.