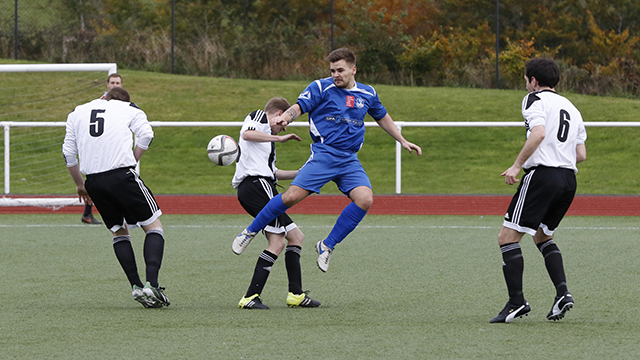 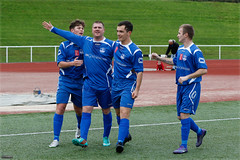 Carluke Rovers should have had this cup tie in the bag at half time after a blistering first half display but instead they only had a slender lead at half time and had to endure a nervy final few minutes before going in to the 3rd round draw.

Rovers were on the attack from the start with Greg Fernie playing a good ball across the visitors goal in the 1st minute that found no takers then Ian Watt saw a shot come back off the bar before being cleared a minute later.

Watt kept the pressure on the Deveronside defence and rounded the keeper in the 5th min but his shot from a tight angle ended up in the side netting.

Carluke kept pressing looking to get the opening goal and Watt was again involved when he set Stuart Mitchell free but again the end shot was just wide of target before Watt himself then had another shot go just over the bar as the stalemate continued. 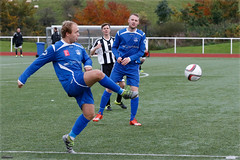 Midway through the half Fernie set Mitchell what looked like a lost cause on the right but the winger won a corner for the home side which Mark Weir fired in with namesake Mark Haddow getting a header in that was cleared by the visitors. Weir set up another chance for Haddow a couple of minutes  but this went just over the Deveronside bar.

Weir was by now becoming a thorn in the visitors side and a driving run from him in 29 mins ended with a shot well saved by the visiting keeper.

Rovers were not to be denied for too long though as Watt won a corner after his shot on goal was cleared, his low ball from the corner to the edge of the box found Weir who set himself up with his first touch before blasting the ball home from 12 yards for 1-0 to Carluke.

As the half drew to a close Rovers kept the pressure on and Scott Burns good work set up a chance for Fernie but his effort again was over the bar.

The second half saw Deveronside at last pose a threat to the Carluke defence when a ball was fired across Gordon Bruces goal but fortunately there was nobody on the end of it.

Ten minutes in to the half Rovers saw a good move involving Mitchell, watt and Fernie end in a corner which when driven in was headed towards goal by Haddow but again the effort was cleared. 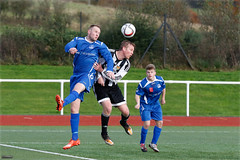 Rovers were being limited to long range efforts for a while before a good lay off found Mitchell on the right but his final effort brought off a good save from the visiting keeper.

The 62nd min saw some fantastic footwork from Haddow as he drove through the Deveronside midfield but unfortunately the move broke down.

This break up of play allowed the visitors to break on the right but their final shot flashed over the home goal to serve as a warning that the tie was far from over and another goal at least was needed for some breathing space.

Weir was involved in the next couple of half chances for the home side but again unfortunately they came to nothing.

The best chance of an equaliser for Deveronside came in the 78th min when they won a free kick on the left, when it was played in the ball broke for their No 10 who somehow put the ball past the post from only three yards out with the goal gaping.

This effort was followed by a free kick that was well saved by Bruce in the 86th min and from the resultant corner he again held the ball well to relieve the pressure on the home side.

Carluke resorted to some long ball defending as the game came to a close but in the ned it was what was needed and they in fact produced the last chance of the match when Mitchell saw his effort go just over the bar.