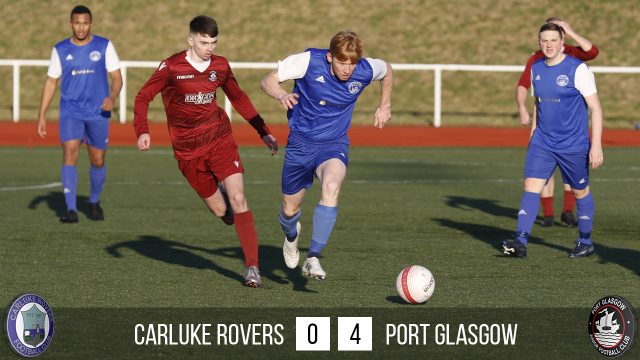 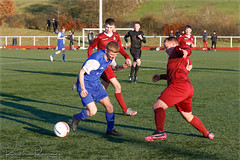 The game kicked off in perfect autumn conditions with Carluke however playing into the glare of the sun in the first half. The game started quietly enough and the first chance came for Carluke when Greg Kane intercepted a pass and fed the ball to Lewis Hill who hit a dipping shot from 25 yards which just missed the Port Glasgow right hand post.

Port Glasgow’s first attempt at goal came in the 18th minute when a corner to the back post was met by their centre half whose header was tipped over the bar by keeper Dean Wilson in his first league start. Carluke did not heed this warning however and only 2 minutes later Port Glasgow took the lead when another cross came into the box from the left wing. Carluke had a couple of opportunities to clear but when it fell to Port’s Number 11 he slotted it into the net from inside the six yard box. 1-0 to Port Glasgow.

This goal raised the spirits of Port Glasgow and after a very even opening 20 minutes they started to show more urgency than their Carluke counterparts. In the 22nd minute they almost extended their lead when their striker flashed a shot across goal which just missed the far post. It was by no means all one way traffic and a cross into the Port Glasgow box was met flush by Lewis Hill, but his header flew wide of the target. 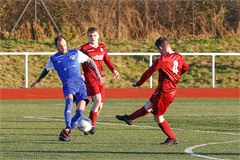 In the 28th minute another header by Hill, this time a looping one, was tipped over the bar. At this stage of the game both teams knew the importance of the next goal. The last action of the first half was a chance for Port Glasgow. Their number 7 collected the ball on the right and cut inside releasing a shot which only just missed the far post. This was to be the last action of an evenly contested first half with the visitors leading 1-0.

Carluke knew they needed to get the next goal and in the first minute of the restart they nearly did. An expertly taken freekick by James Frame on the right wing just eluded the head of Maxi Neossi and then the foot of Jordan Conlon with the Port keeper rooted to the spot. Carluke were to rue this missed opportunity when a break down the right by Port Glasgow number 10 finished with a low cross into the box only to met by an unmarked Number 7 who calmly rolled the ball into an empty net. This was the killer goal and made the score 2-0 to Port Glasgow. At this point Manager Mark Weir made some changes including the return of club captain Mark Cassidy from an extended injury lay off. 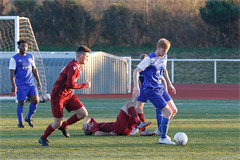 As mentioned earlier the second goal in this game was going to be crucial and so it proved. In the 63rd minute Port Glasgow number 11 beat the offside trap and with a clear run through on goal calmly slotted the ball under Wilson in the Carluke goal to make the score 3-0 and effectively end the game.

A fourth goal for Port Glasgow was to come in the last minute as Carluke chased a consolation. While Carluke were on the attack the ball broke kindly to Port Glasgow’s number 15 who ran down the wing and squared to number 12 who tapped the ball into an empty net with most of the Carluke team still in the other half. This made the final score Carluke Rovers 0 Port Glasgow 4.

In summary this was a good Port Glasgow team who have won five of their six league games. That said the scoreline did flatter them and had Carluke got the equaliser it could have been a different result but Rovers let their heads go down at 2-0 and there was only going to be one winner after that.There are good signs in the squad and the team are moving in the right direction. With a bit more belief results like yesterday will be avoided.