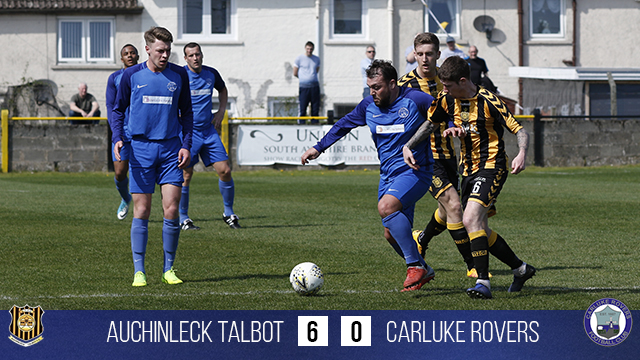 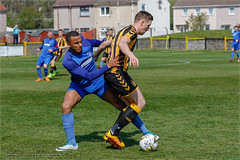 Carluke last visited Beechwood Park in November 2017 in the same competition and fought well only losing the match by a single goal, could they do the same again.

The match started poorly for Carluke when a ball swung in from the right was met by the head of Auchinleck number 10, his header just out of reach of Adam Brown in the Carluke goal.

Carluke responded well following the early goal with McKenna and Lafferty chasing everything and threatening the Auchinleck defence.

In the 23rd minute Lafferty came close as his shot through a crowded box slipped by the Auchinleck keepers left hand post. 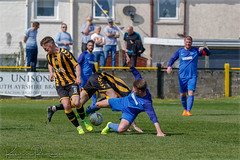 Craig Grierson threatened down the right and had the beating of the Auchinleck defence on several occasions.

With several chances at both ends, only some great saves by Brown kept Carluke with just the single goal deficit.

With the 1st half coming to a close Auchinleck then effectively finished the tie as 2 quick goals on 40 and 42 minutes sent the home team in at the break 3 nil up.

The second half continued with Auchinleck pushing forward and creating several chances and Carluke making the odd break, Kane came close early on but his shot was easily dealt with.

Carluke brought on Stuart Mitchell to add a bit of pace on the left and this proved more than a match for the pacy Auchinleck defence.

With ‘Speedy’ making several good runs and balls into the box although no takers for Carluke. 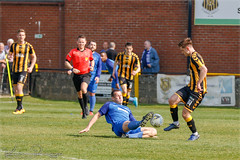 The hot weather was proving tiring with Carluke having to chase the game and in 67 minutes Auchinleck again broke down the Carluke defence and scored the 4th.

With the Carluke defence tiring and Auchinlecks fitness telling the final goal of the match came from the penalty spot in the 87th minute, Auchinleck number 3 sending Brown the wrong way.

But for Brown in goal for Carluke this scoreline could have been a lot higher.

With 3 league games remaining for Carluke and the chance of clinching the 3rd promotion spot there are now some big important games to look forward to.